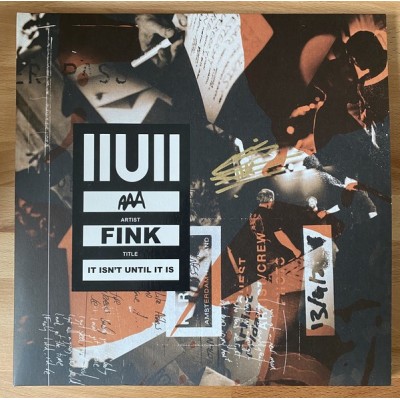 2LP 140-gram bronze vinyl in a printed inner sleeves and a gatefold sleeve, plus 24 page 12”x12” booklet. Comes protected by recyclable bio-based shrinkwrap. Fin Greenall's 25-year musical journey as Fink has been an interesting one, with early downtempo electronica explorations for Ninja Tune's N Tone subsidiary being followed by a serious of albums that saw him move towards a more organic, band-led sound (Fink now being a trio that also includes bassist Guy Whittaker and drummer 'Tim Thornton'. IIUII (It Isn't Until It Is), the latest Fink full-length, finds Greenall in an introspective, nostalgic mood, offering fresh band versions of tracks he originally wrote and recorded at the end of the noughties. There's much to admire, from the folksy, trip-hop influenced haziness of opener 'Sort of Revolution', to the bliss of 'Berlin Sunrise' and the subtle prog rock influences of the brilliant, semi-acoustic haziness of 'Warm Shadow'. Signed copies were available from www.recordstore.co.uk as an exclusive
001_80611

